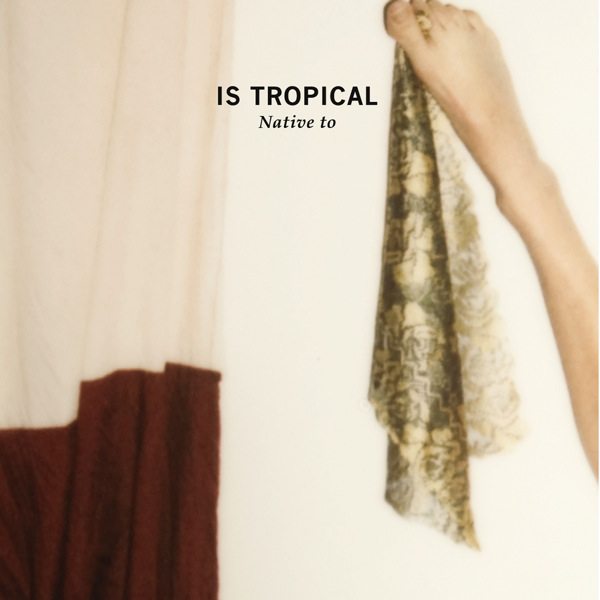 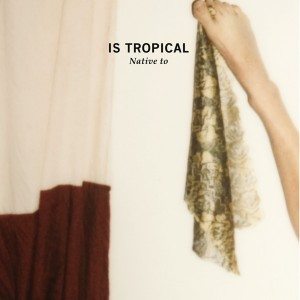 don’t beat yourself up for being too blind

I would not be mad at any DJ who played “Lies” every 30 minutes the next time I’m out (Barcelona DJs, take note!) Just enough intro to allow forÂ leisurelyÂ drink-finishing before setting the glass down and losing my limbs.

London’s Is Tropical have followed up Â a pair of amazing tracks, with an even more epic video (below), and now an album that I can’t stop listening to. If you like what you have heard so far then you will love Native To. Fuzzed out indie beach electro that doesn’t hide it’s desire to get stuck in your body. Songs like “Land of the Nod” and “I’ll Take My Chances” feel like they could be chants on an indie pirate ship while others like “The Greeks” and “What???” are perfect for a battle montage or other such cinematic event. The album could be trimmed of a few weaker tracks but all 12 do seem to bring different things to the table so I can’t argue with that. I can, however, look forward to more from this masked trio. END_OF_DOCUMENT_TOKEN_TO_BE_REPLACED 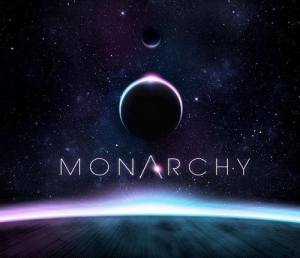 let’s paint you picture perfect, run around in the rain, building a magic castle, escape on our aeroplane

â™«Â Monarchy – Gold In The Fire

Weightless. Floating. Deep space breathing on your neck as a faint beat builds in the blackness. Suddenly the stars brighten and the sky is alive with lights as the planets swirl on theÂ infiniteÂ horizon. That is kinda what it’s like to listen to “Gold In The Fire,” my latest favorite track off of Monarchy’s debut album. Well, that may not exactly be accurate…

Monarchy have not been an easy band to follow since debuting under a shroud of mystery nearly 2 years ago.Their debut self-titled album was slated for release last year (and possibly even was since I somehow have a copy of it) but they have since retreated to the drawing board, re-tooling the album and recently releasing under the name Around The Sun. The onlyÂ differenceÂ I can tell is the addition of the track “I Won’t Let Go” which I am not going to argue with at all. The British due certainly went more polished and pop since their early demos but I feel like they have done it well. Like if Hurts were launched into space in a disco ball or something. Early attention grabbers like “Black, The Color of My Heart,” “The Phoenix Alive,” and “Love Get Out Of My Way” are all great, but album closer “Travelling ByÂ Ambulance” is a slow burn show stopper that deserves special mention. Get yourself some Monarchy, in whatever form you can, and catch them live as I hear that is a rarified treat. 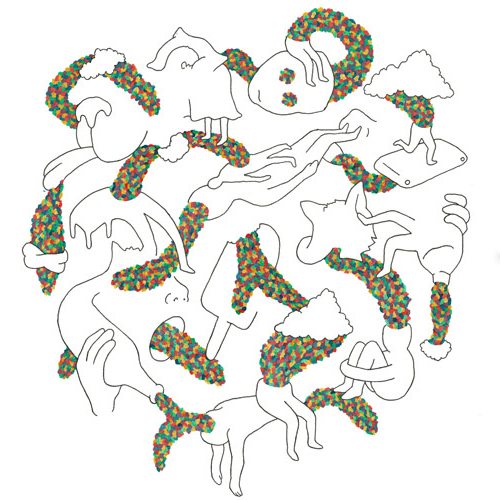 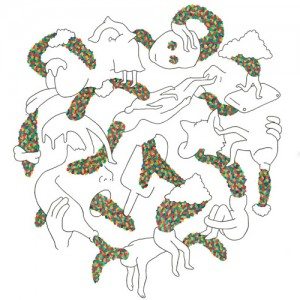 cause there’s one hope, one thing i know is true, yeah i would drop all of my lovers just to kick it off with you

Before we get into how good this band is and how fun their single “Stuck In My Id” is we all need to take a good stare at this EP art. I’d seen it probably 20 times before I really looked closely and tried to figure out what was going on. Awesome. Luckily Athens, GA’s, Reptar aren’t as obscure and complex, instead instantlyÂ likableÂ as they effortlessley weave bits of indie rock and danceableÂ fun together on their debut EP Oblangle Fizzle Y’all. “Stuck In My Id” builds layers of bouncy guitar on layers tweaky synths and frosts it all with unique vocals to make a tasty treat that fits perfectly with summertime. The whole Oblangle EP is solid stuff and I highly recommend you stream it at their Facebook and thenÂ grabÂ your own copy. 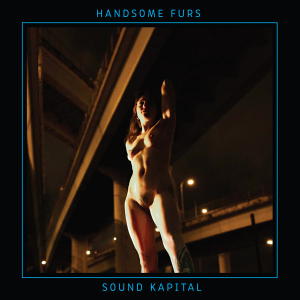 where did the feeling go? iÂ got it back when the plane touched down

If you didn’t already catch the two teaser tracks from Handsome Furs’ latest album then let this act as a friendly slap in the face to get your act together and procure Sound Kapital. “Repatriated” is one of my favorite songs of the year so far and Sound Kapital fleshes out this goodness to 9 full songs. The Furs have kicked up the synth grooves and are going for infectous gold on their 3rd LP. Everything is catchier and grander as they take their “electro punk experiment” to the next level. Viva la Progression! 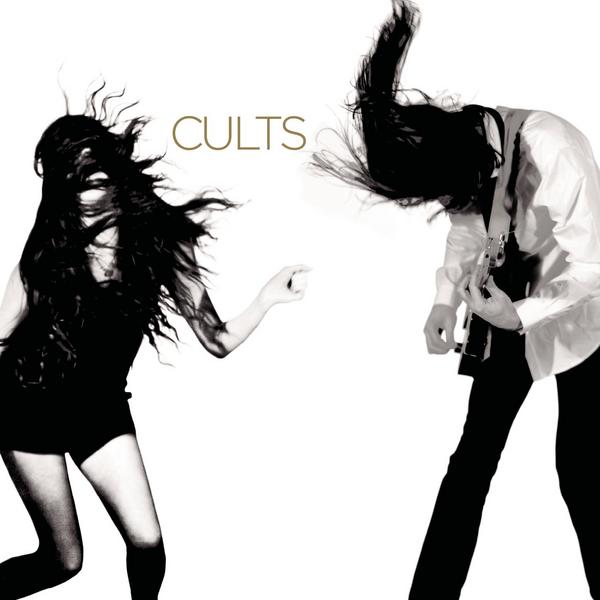 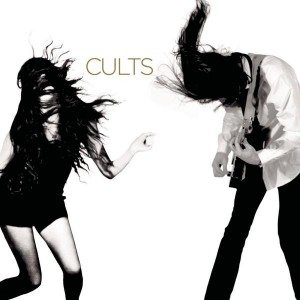 he took my heart away and left me to bleed out, bleed out

Perhaps it really doesn’t need to be said but this Cults album is pretty good. I swooned over a some tracks a few months back but was then pretty disappointed by them at The Great Escape and didn’t know what to think. The album has been out for a while now and I’m back on board. Not album of the year but definitely a great blend of throwback pop and sweet boy/girl vocals that seem just right for summer time. Oh, and I can’t forget the great video for “Go Outside” where the band took a potentially touch topic and handled it with flair respect. Read about it and watch it at Stereogum. Anyway, I know I’m way late on this one but I felt that a little extra attention was deserved. 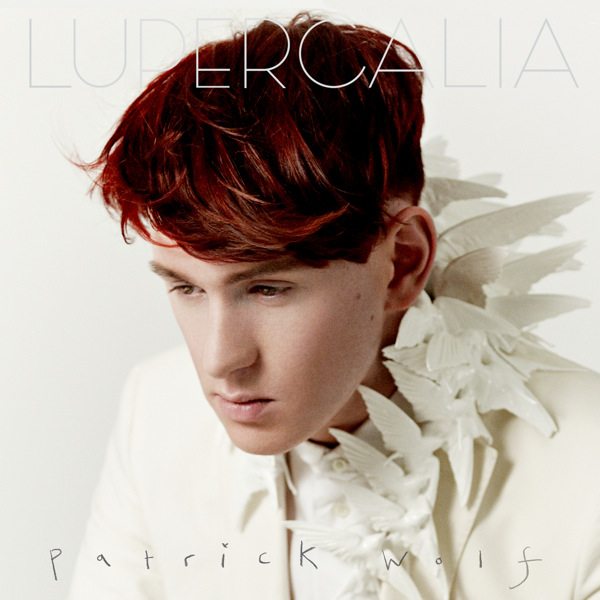 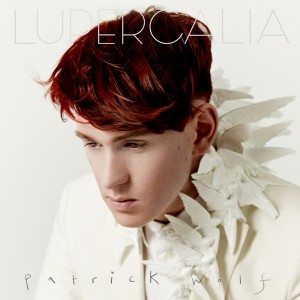 but you were down and out of luck, now side by side, we’re looking up. finally.

I have this theory about great film artists and their declining wise career choices coinciding with children (See: George Lucas, Eddie Murphy, Kevin Smith, etc). In the case of Patrick Wolf he is neither a filmmaker nor does he have any children but the big shift in his life leading up to Lupercalia was love, happiness, and stability. Potential creativity killers. Luckily for us (and him, I guess) quite the opposite seems to be true. Nestled comfortably in his new skin, Wolf has crafted an album so whole and radiant that his energy is palpable. Album Opener “The City” sits near the top of the Best Songs of the the year list with it’sÂ enormousÂ hooks and viral infectiousness. Album closer “The Falcons” rides a white tiger of soaring strings and dancing melodies that leave me reaching for repeat each time it ends. Even professional sour-pusses Hurts couldn’t really bring Wolf down on his other single “Time Of My Life” (below).

As for the rest of Lupercalia, it is just a pure joy to listen to these solid jams and feel the goodwill and talent of one of UK’s finest.

Get loud at Soundcloud 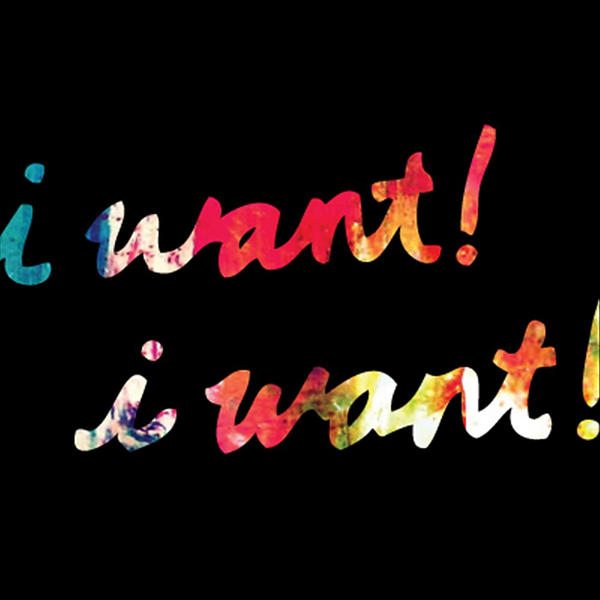 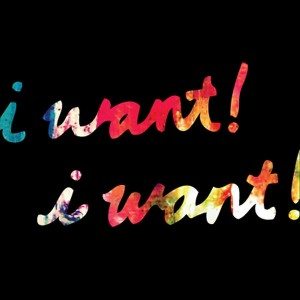 If you missed Walk The Moon’s official song of the summerÂ then here is your chance to redeem your ears. Walk the Moon are really amazing. Seriously. I couldn’t really handle how how good they were at The Great Escape and now, basking in their full album, I can’t really handle how good it is either. Bands this young are supposed to go through an album or two of growing pains before finding their stride and making jams this layered, catchy, and generally well formed. Their debut LP I Want! I Want! is nonstop sonic gold as they kick down the door with “Anna Sun” and then continue with the deeply funky and soulful “Lisa Baby.” I won’t even get into what happens between this and the album’s closer “I Can Lift A Car” because it’s too good to explain. If you like these tracks then you will love the rest. Can’t you just feel the neon colored adrenaline injection while you listen!?

A song asÂ buoyantÂ and catchy as “Anna Sun” leaves Walk The Moon wide open for assumptions of one-hit-wonderdom but “I Can Lift A Car” grinds that notion to dust. The slow energy build combined with thoseÂ harmoniesÂ make me tingle every time I hear it. The cycle of love lost and gained never sounded this good. Buy this album now. Here. And if you know anyone who likes upbeat and catchy indie pop jams then buy it for them too. They will thank you. Probably with home baked cookies. Oh, and if you buy the album from eMusic (like I did) you will get the awesomely squirrel-ly bonus track “William Blake.”Â So high pitched. So good.

Crank the amp at Bandcamp 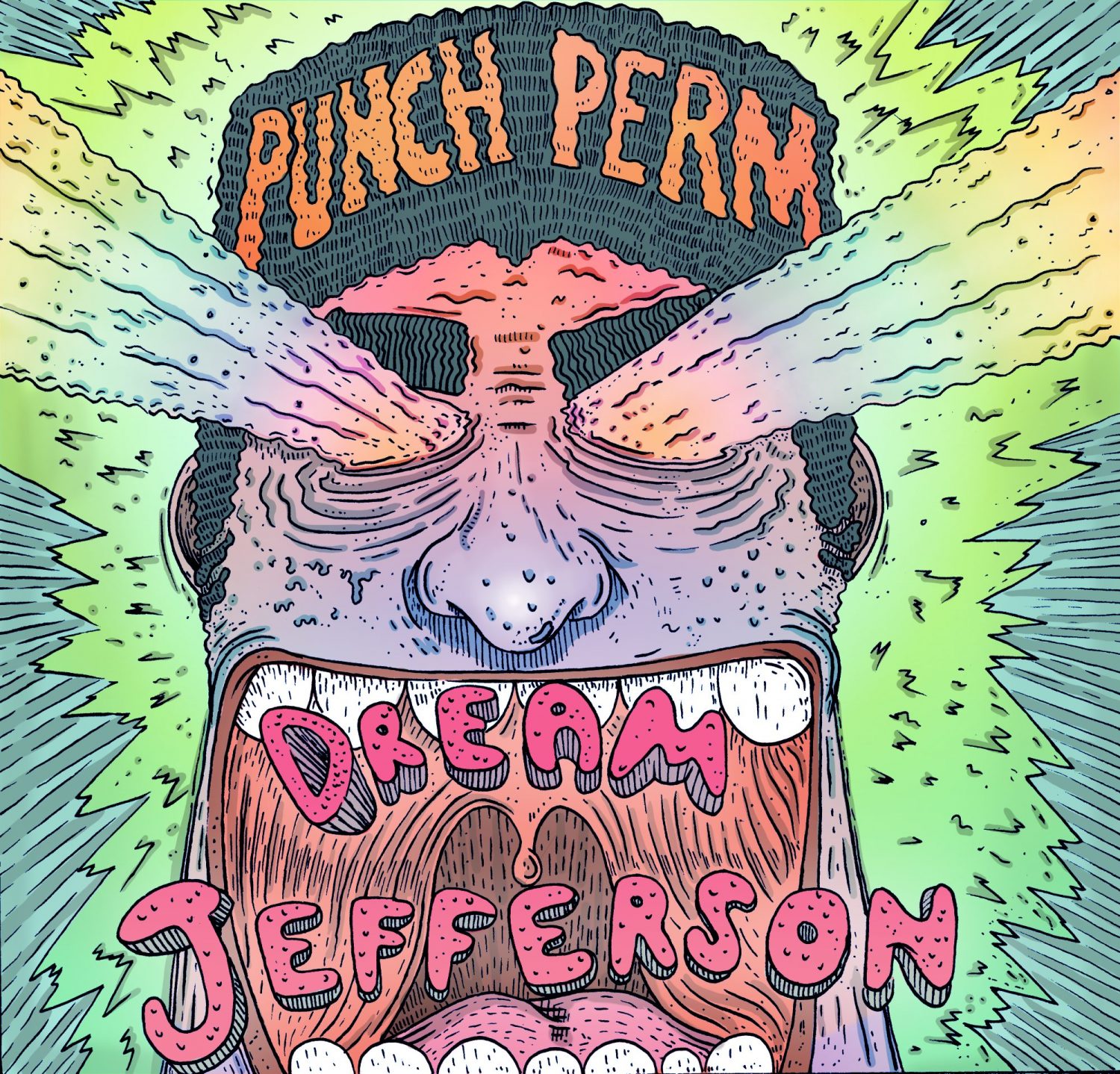 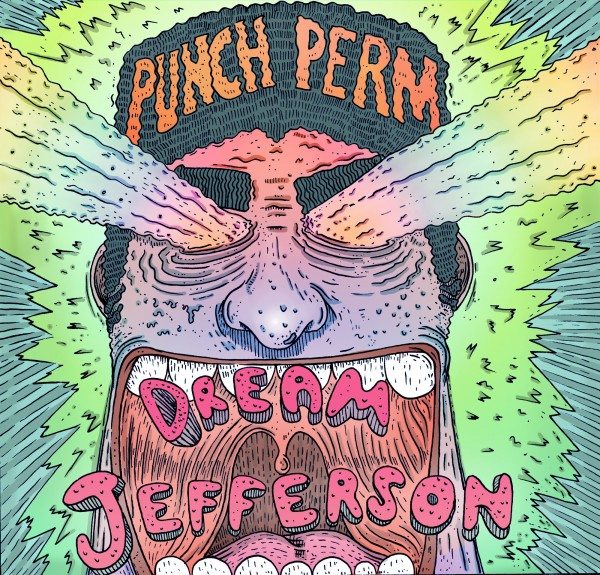 Fcuk Jay-Z and Kanye, the only new rap release you need to be worrying about is the new Dream Jefferson EP Punch Perm which went live to the world a few minutes ago. Dream Jefferson’s Corboe and Owel trade verses with slick ferocity, not slipping an inch from their stellar debut EP Sasquatch Bury Their Dead. The music gets a bit more adventurous as they slip in some chill throwback synths on “The Seed and Sower” and some funked up trotting beats and grunty vocals on “All Things Shining.”Â The rhymes and storytelling are quick,Â irreverent, and on point as they drop odd references to things like The X-Men (“The Danger Room”), The Royal Wedding (“Westminster Abbey”), and Final Fantasy and Beyonce in the same song (“Robo Kill Beneath Disco Club Layla”).Â I don’t know how Corboe and Owel got album art that is basically a mirror of what happens when you hear these jams. Nifty trick. Also a nifty trick is fleshing out their sound with a guitarist and some lady back-up vocals. Damn, ok, so now I think I have to post “Purple Hearts” too.

Gotta love that beat and groove. Gotta love Dream Jefferson. There is just no other way. If you are anywhere near Ottawa tonight then hit up the record release party and high five the guys from me.

Crank the amp at BandcampÂ <<– Get EP FREE here!