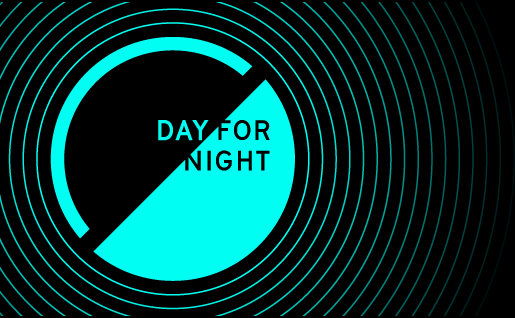 The city of Houston needed a win this year. Between the devastation of Hurricane Harvey and the less-publicized Tax Day flood, the fourth-largest city in the United States had a rough 2017. Happily, Day for Night’s third year was more than a win – it was a celebration of the best and weirdest of the city, along with international artists and musicians to reflect the spirit and culture of the strong music & art scene there.

Day for Night is unique because of two intertwined factors: the venue and the respect they show to the light & art installations found within. The two outdoor main stages are pretty run-of-the-mill festival fare, but the rest of the fest happens inside the now-defunct Barbara Jordan Post Office building, which is better described as a sprawling warehouse. Left mostly dark, the building housed two indoor stages on the ground floor, several bars & VIP areas, and an entire second floor dedicated to art installations with a particular focus on light, sound, and interactivity.

While art installations are nothing new to festivals, they often feel like an afterthought, something to entertain audiences on their way from stage to stage. Day for Night blows others away on the sheer scale and thought put towards them. You could easily spend an entire day exploring and experiencing the pieces, a fact underscored by the full queues for the bigger names in the visual lineup, including Ryoji Ikeda, Mathewe Schriber, and Ryoichi Kurokawa. But despite the quick-moving lines, the massive interior space meant that even though the festival seemed very well-attended, crowds rarely became an issue. You could move quickly and easily from installation to installation, spending as much time with the interactive pieces as you’d like without feeling rushed or pressured by a horde of people behind you. Clever partitioning meant that the immersive experiences, often involving detailed sound design in addition to bright and moving lights, never interfered with each other or prioritized one over another.

None of this is to diminish the incredible music lineup, drawing names across the spectrum. The eclectic mix appealed to all music fans with bigger names such as Nine Inch Nails, Cardi B, and Justice rightfully attracting many. But, like I said, this was also a celebration of the weird, and the more experimental performances from artists such as Godspeed You! Black Emperor, Jlin, and Shabazz Palaces were not only welcomed, but met with eager and raucous crowds and applause. Other big name Texas festivals like Austin City Limits or, elsewhere in the US, Pitchfork Festival struggle to draw so many stellar fringe artists. North Carolina’s Moogfest might be a closer comparison, but even that festival lacks the visual component and comes at a higher price-tag. 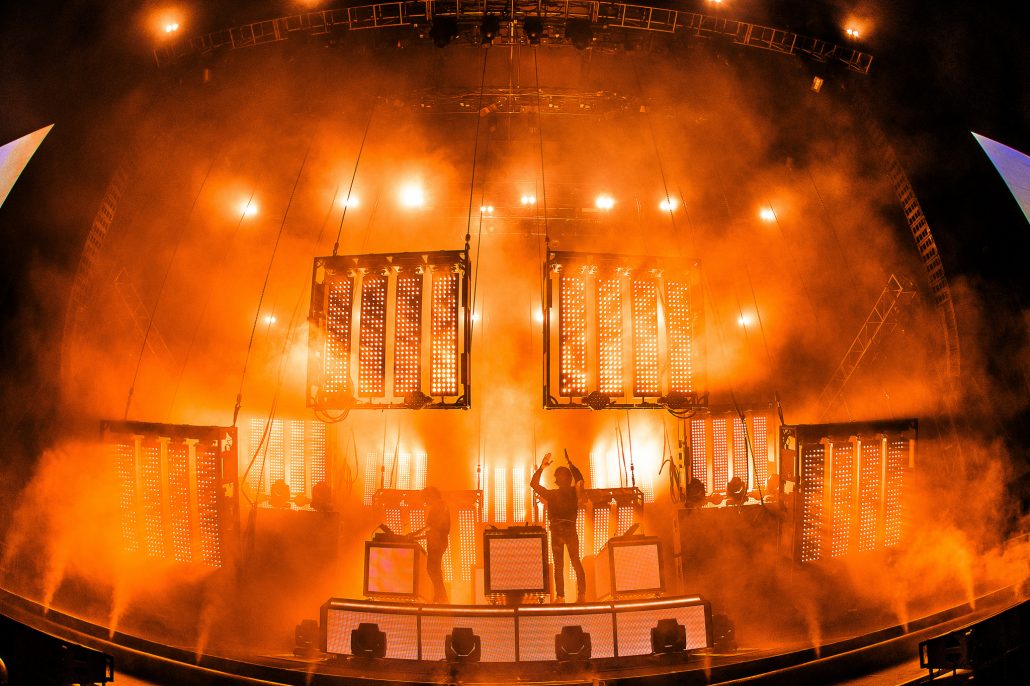 Justice at Day for Night 2017. Photo by Nick L. for Festival Snobs

Musical highlights included a powerful homecoming performance from the Houston-born Solange, who stunned the audience on Sunday with towering onstage sculptures, appearances from the TSU marching band, and a dynamic, heartfelt performance drawing largely from her masterful A Seat At The Table album. Closing out that night was the incomparable Thom Yorke, whose ensemble (including longtime producer Nigel Godrich) ripped through a 90-minute set filled with selections from The Eraser & Tomorrow’s Modern Boxes, as well as songs from his Atoms For Peace project. Electronic acts Demdike Stare, Mount Kimbie, and the aforementioned Jlin explored brutal and heady terrains, and the more dance-centric Jamie XX, Roni Size, DJ Tennis, and Nina Kravitz had crowds tearing up the floor. Back on the main stage, Russian ex-pats Pussy Riot powered through a set that engaged the huge crowd despite being mostly in their native tongue, and Justice had every person in the crowd losing their mind with perhaps the best stage production of the weekend.

Day for Night 2017 is the best festival experience I’ve had in years. There are always things to improve: the layout of the Blue Stage meant most of the audience had limited view of both the stage and the visuals, especially important as it housed most of the electronic artists. Vegetarian and vegan food options were limited, and better signage for restrooms scattered within the building could have improved lines. But the staff was helpful and friendly, audience spirits remained high all weekend despite heavy rains on Saturday night, and there was a true sense of brotherhood and appreciation for how special the festival was. 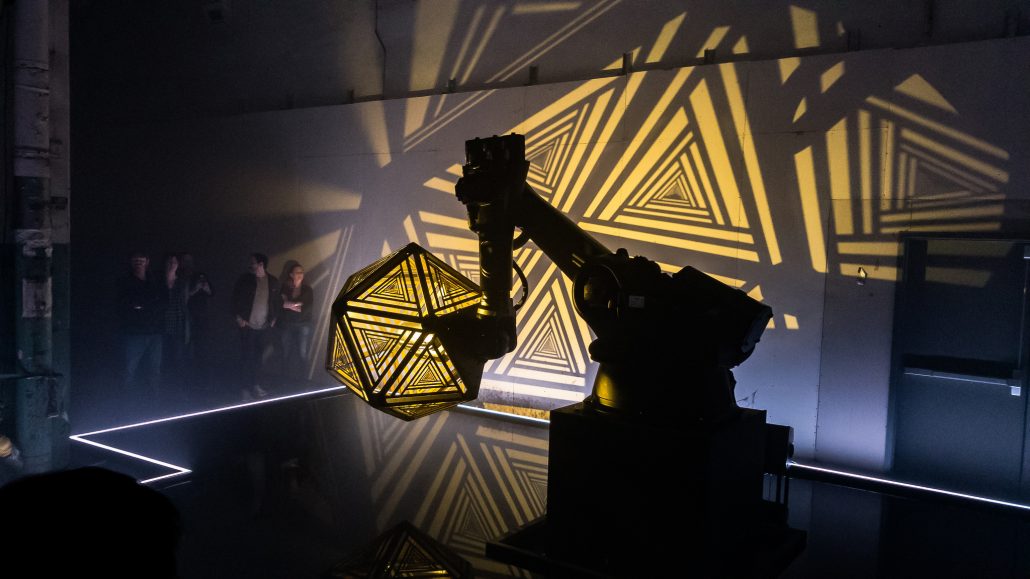 On Sunday, I met a festival-goer who had lost her apartment & many of her belongings in the hurricane, which meant she had to leave a job she loved for a higher paying retail job to help offset the losses. Shortly before Thom Yorke, I asked if the festival was a way of her giving a middle finger to 2017. She laughed and said, “No, this festival is a way to celebrate what I love. That I’m gonna be – that Houston’s gonna be – just fine.” Then we hugged and turned to watch our musical idol take the stage. 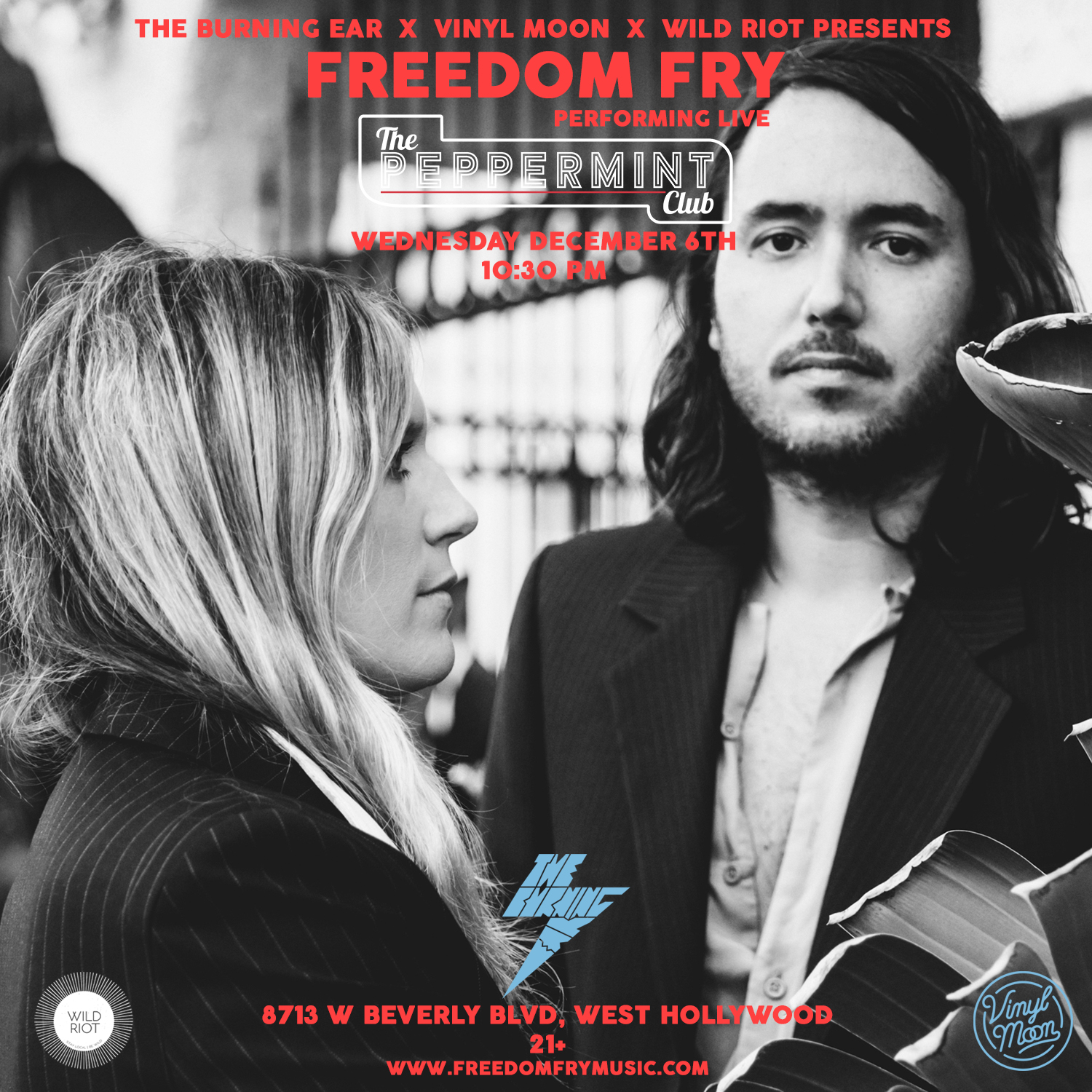 Vinyl Moon alumni Freedom Fry is playing a show! They were featured on Volume 15: Taking Shapes with their terrific cover of Nirvana’s “Smells Like Teen Spirit”.

It’s going to be an excellent time, so hopefully we’ll see you there. Link to get tickets HERE!

I dont know about you, butÂ I feel like its a rare treat to go to a show where you are genuinely stoked for all 3 bands on the lineup (well, except for Blind Date showsÂ but I organize those so…). Well that was the story of my awesome night. The amazing Vacationer sandwiched between up and coming Wild Party (remember them!?) and old school favorites Hellogoodbye.

Vacationer absolutely slayed. They played all the classics from Gone and a bunch of fantastic new tracks. Standouts for me were “Shining” off the upcoming LP Relief and “Warmer” available only on “The Wild Life” 7″.

Now I haven’t listened to Hellogoodbye in forever but after seeing them last night I need to catch up! So much energy and the crowd was locked in! 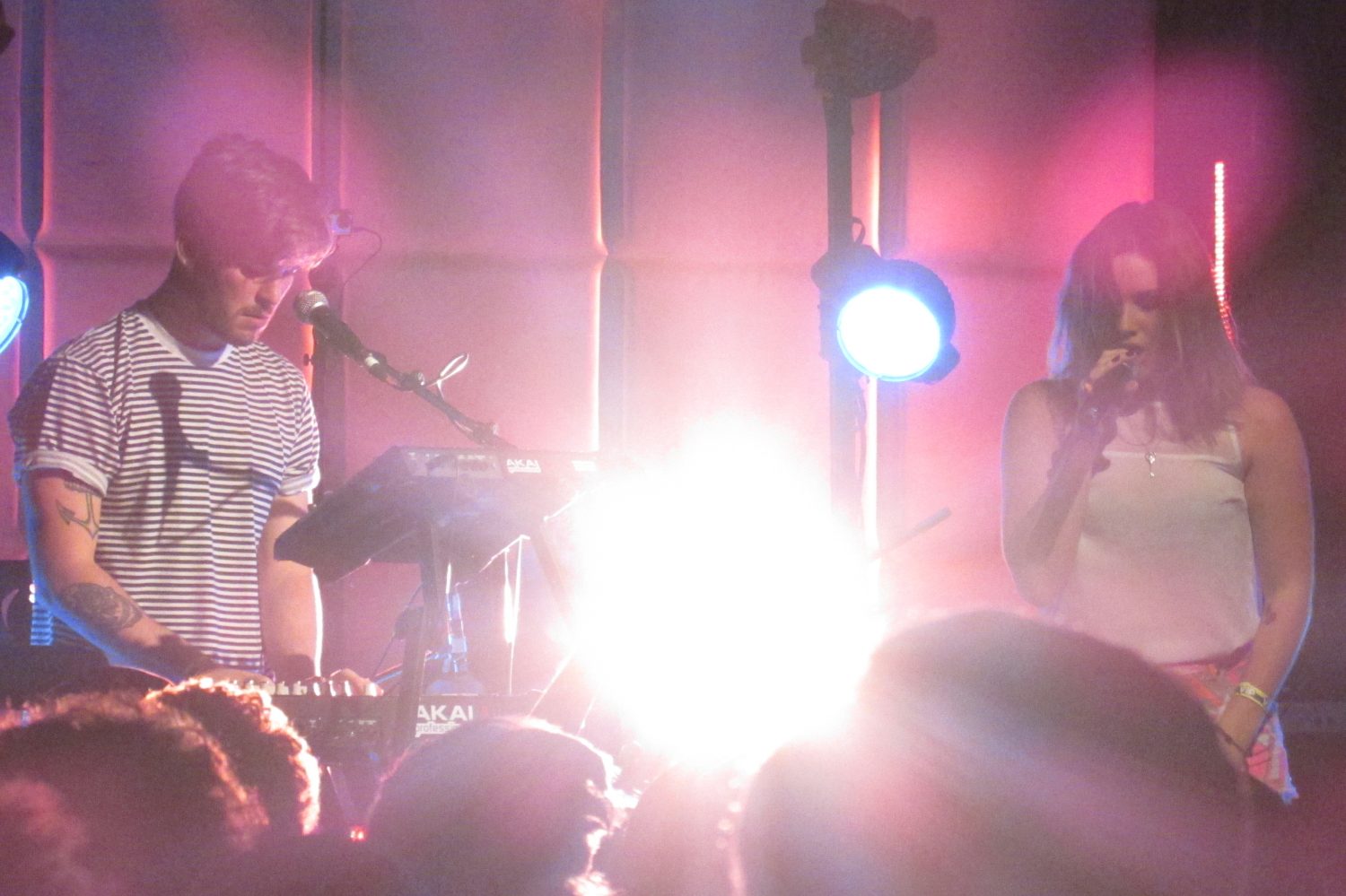 Last night was an awesome one-two punch of down-under goodness with New Zealand’s Broods and Australia’s Strange Talk. The room was packed for Broods’ first proper LA show and theyÂ fed off the crowd, pumping tons of energyÂ into their jams. There was even a new song or two that sound great.

ThenÂ Strange TalkÂ came on and celebrated the long awaited US release of Cast Away by absolutely slaying their set. Great times all around! I have some video of some killer guitar solosÂ but they seem to have blown out the mic on my camera. Too hot!

As usual, dive into the show through the eyes and ears of the sexy people that were there! Then catch all my photos here, you stalker. 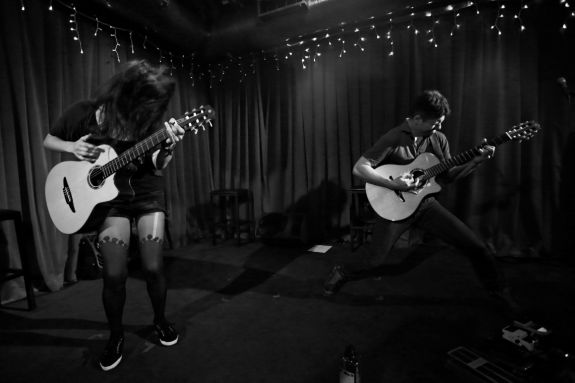 Rodrigo Y Gabriela. I’d been hearing their names for years and probably like many of you, dismissed them thinking that instrumental acoustic guitar music wasn’t quite my thing. Then last week, upon my return from a 50 mile bike ride in Mexico (and mere hours before whatever was in that water caught up with me…) and in the perfect Cinco de Mayo mood, I got to see them live. And it changed everything I thought I knew about instrumental acoustic guitar music.

KCRW hosts these “Apogee Sessions” in recording studio in Santa Monica andÂ it is an amazingly intimate settingÂ to see music. I’d been lucky enough to see Vampire Weekend, Cold Ward Kids and Airborne Toxic Event there so wasn’t going to risk missing another great show. It was everything that the hype had promised.

Rodrigo and Gabriela are long time friends from growing up in Mexico and their guitars spoke and danced between each other like nothing I’d ever seen.Â The music itself is endlessly restless, shifting gears and genres multiple times in a song. They touch on all their influences, even giving their acoustic guitars some serious metal thrashing. Bt watching their fingers make all those soundsÂ up close it something truly magical. I would highly recommend their live to show anyone. Although, you may not get the very special cover of Radiohead’s “Creep” that we got as encore. And you certainly wont get me singing along from the back of the room!Â (Relax, everyone else was singing too…) 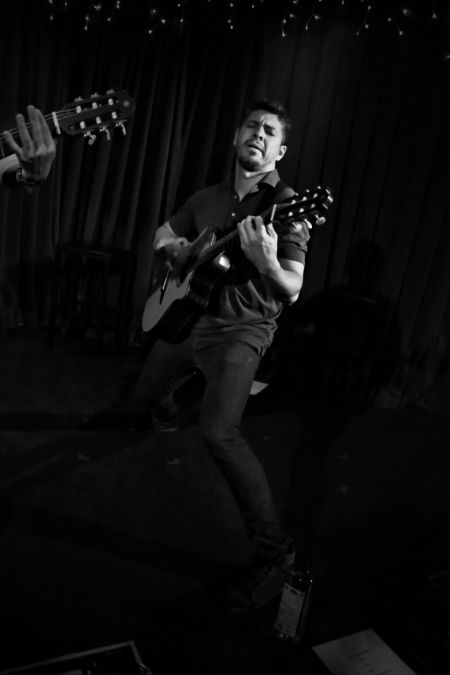 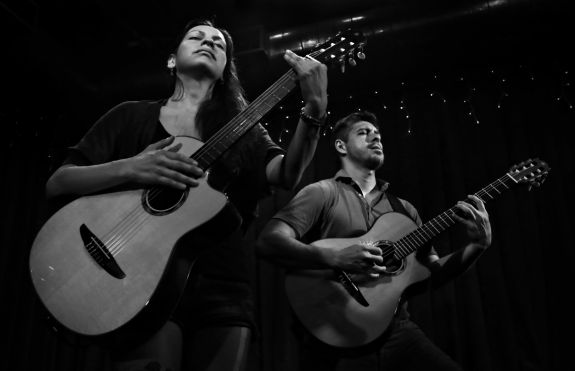 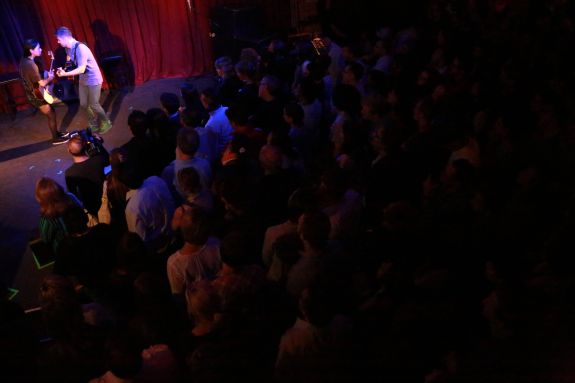 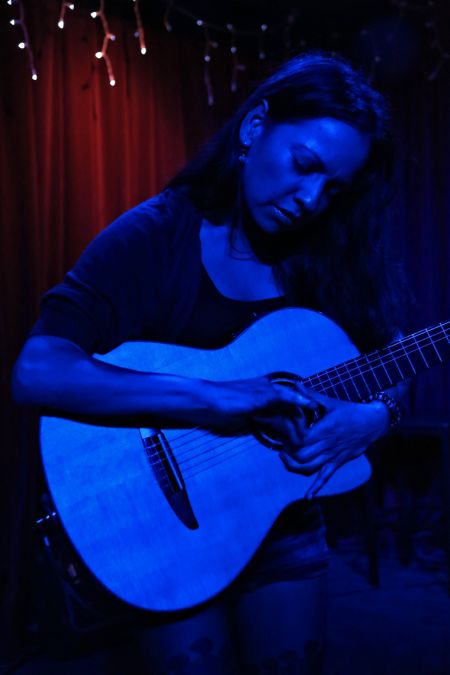 The UK’s Breton came to LA last night and rocked the damn house for a sadly under-filled room. A lot of people missed out on a killer show as they ripped and romped through their offbeat indie favorites like “Envy” and “Got Well Soon”. Those of us who were there know whats up… 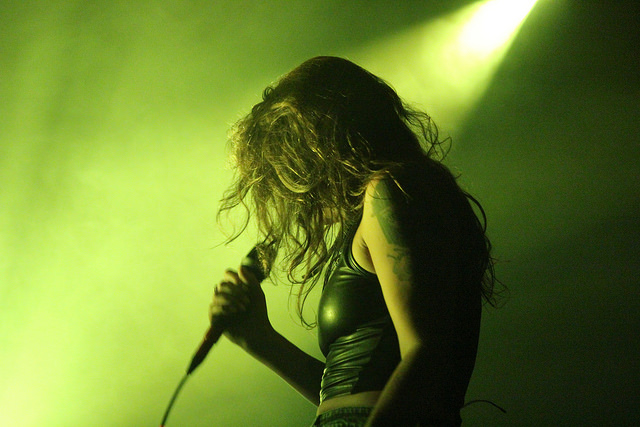 I finally got to see Tove Lo live last night at Popshop and it was everything awesome I could have imagined. Her voice holds up, the production was killer, and most importantly, everyone was stoked to be there.

ButÂ what did other people think!?

Bonus jams. Get down. 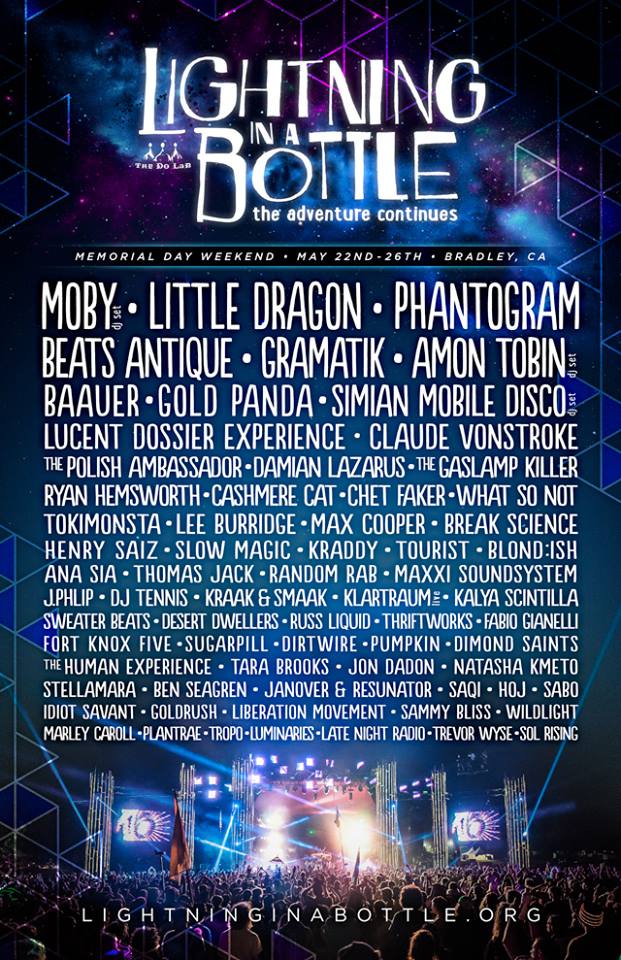 Blah blah blah Coachella. Thats all anyone can talk about this time of year but frankly that festival is not for everyone… In looking for an alternative to 3 days walking the desert runway (and 3 weeks fishing dust out of my nose) I saw that Lightning In A Bottle has a killer lineup this year. The festival takes place on a forest and by a lake. That is exactly the kind of setting I want for my music festivals! Keep your sand storms! I’m climbing tree, going swimming, and laying Â in the shade while listening to these rad bands that you wont find is the dustbowl of Indio this weekend…

Call him a legacy act if you have to but besides being one of the finest (and biggest) acts of the 90s, Moby is still kicking out jams. And unlike the unfortunate Fatboy Slim set at Coachella, I bet you he wont be pandering to contemporary EDM trash with his set.

Now this is a festival band! Big sound and perfect for rocking out with hundreds of strangers who all know the words!

All the music this killer beat-smith releases is available for “name your price” which means he wont break your bank when you fall in love with his jams and need all him music after the fest.

Time for another trip…

You have no idea how excited I am for Marley Carroll! These two jams below are enough that he should be top of the bill yet somehow he hasn’t blown up yet. So damn groovy and addictive!

9. Story Of The Running Wolf

Watching this music lie in a forrest will either be totally cool or totally haunting but either way its gonna feel crazy.

If that linuep doesn’t get you jazzed then check out the full lineup here! Even more awesomeness like Little Dragon and The Gaslamp Killer.