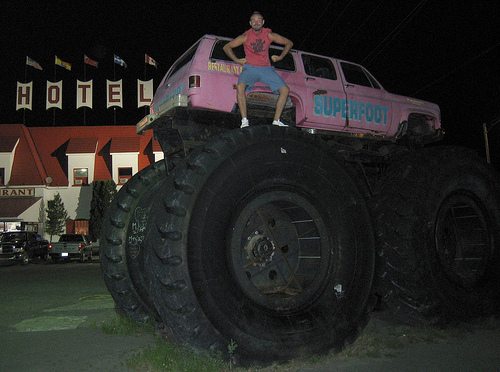 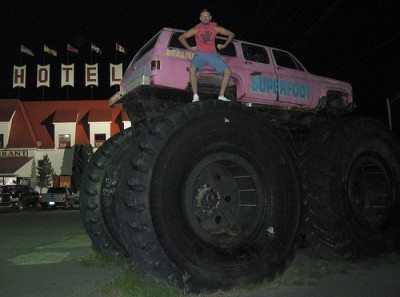 Now we’re cooking with gas! My hearing is back, I’m a year older, I’m in Canada, my internet connection blows, what better time to get back on the wagon and get these rock-wheels rollin’? This roundup has been in the pipeline for ages now and is a bit outdated by even my standards but it’s still good and/or interesting music so get to listening!

â™« The Drums – Down By The Water (The Soundmen Remix) / This has been my total jam as of late. So epic! Makes me want to sing along while standing on the bow of a 100 foot yacht with a helicopter-mounted camera filming me. Or just drive fast. That totally works, too. [more The Drums]

â™« Miami Horror – Make You Mine (Death Metal Disco Scene Radio Mix) / The original wasn’t funky enough for you? There are so many layers of funk on this remix it’s like a funk parfait. And who doesn’t like parfait? Everybody likes Parfait! (Alex, that’s for you) [original post]

â™« Fool’s Gold – Surprise Hotel (Micachu & The Shapes Remix) / Good times is what you expect and good times is what you get. Even if they are a bit mellowed out and the lyrics have been cut. The dude was singing in a language you didn’t understand anyway and besides, I like to be able to hear exactly what kind of magic each instrument is making individually. [original post]

â™« Esser – Work It Out (Sinden Remix) / The remix that turned me onto the original. Makes me think of bike riding as a kid. The world was my playground and life was good. Then the scuzzy synths come in and we all grow up and put our feet in our mouths. [original post]

â™« Marina & The Diamonds – I Am Not A Robot (Penguin Prison Remix) / Marina’s Robot song has always had a bit of a dark side to it and Penquin Prison runs with that, turning the track into a bit of a haunting and eerie groove that makes it a bit weird to listen to in a dark basement. Next track! [original post]

â™« WhoMadeWho – Keep Me In My Plane (Modernaire Remix) / Don’t you love it when TBE faves meet on a track? Heck yeah you do! Modernaire add a bit of glitchy goodness to the blissed out original without losing its buttery smoothness. [original post]

â™« Casiokids – Fot I Hose (Axemax remix) / If the original bit of instrumental spazz-out didn’t satisfy your inner ADD-addled 8-year old then this one should do the trick. [original post]

â™« Cut Copy – Hearts On Fire (VIKING remix) / You already love the original and if you heard VIKING’s Kid Cudi remix then you love him too. Now you can love them both at once! And in half the time! Thanks science!

â™« Shakira – She Wolf (Calvin Harris Remix) / Everybody’s favorite sub-5′ Latina pop-star is back with another hit you may have heard recently. Leave it up to Calvin to sex it up even more with that thing he does. Oh, and grab the original in a Spanish language version at PMA. Who hasn’t always wanted to know how to say “thighs wide open” in espaÃ±ol? [more Calvin Harris]

â™« BeyoncÃ© – Single Ladies (Dolby Anol edit) / Let’s close out all this Kanyegate bologna once and for all with this BeyoncÃ© remix. I’d like to see her and her single ladies do their dance moves to this beat. Then you might have won, lady! Dolby Anol also does a pretty good remix of Kings of Leon’s “Use Somebody” but since AndrÃ© Anjos already murdered that one there is no point in even going there.

â™« Kid Cudi – Make Her Say f. Kanye West & Common (Afrojack Remix) / Ok, last Kanye, seriously. Unfortunately I can’t say the same for Dame Gaga who is just all up in this roundup. Nothing super crazy in this remix but consider what they had to work with. It breaks down pretty fresh for Cudi’s verse though. [original post]

â™« Wale – Chillin ft. Lady Gaga (The Knocks Remix) / A lot of people hate on this track but I stand by it’s summer anthem appeal. If I had a convertible and lived in Miami I imagine I would have been playing the original all summer and would be pretty stoked on having a remix to change things up with. And by The Knocks, no less. [original post]

â™« Lady Gaga – Paparazzi (Filthy Dukes Remix) / I told you, Gaga all up in it. Here the Dukes put their bleepy brand of Filthy all over it and called it a day. Done. [more Filthy Dukes]

â™« Lady Gaga – Poker Face (LAZRtag Remix) / LAZRtag knows what’s up and they put their knowingness all over this classic. I wonder if this track will ever get old to me? Probably not. I just think of Gaga doing that poolside thrusting thing from the video and it renews all interest. Ooooh, but then there was that thing about her having a penis. Hmmm…

â™« Building Rome – Poker Face (Lady Gaga cover) / How come more talentless bands don’t cover current pop hits? It’s really a pretty easy way to get noticed in the current high-speed musical climate. This version just makes me want to listen to the original. Or better yet, watch the video. But I now know who Building Rome is. Mission accomplished. With that said, if these guys played this as an opening act at a show and if I was drunk enough I would loose my shit.

French Horn Rebellion understand the importance of Beaches. And Friends. And...

[Contest!] 2 tickets to Fanfarlo in Brooklyn, Tuesday 9/22
Scroll to top