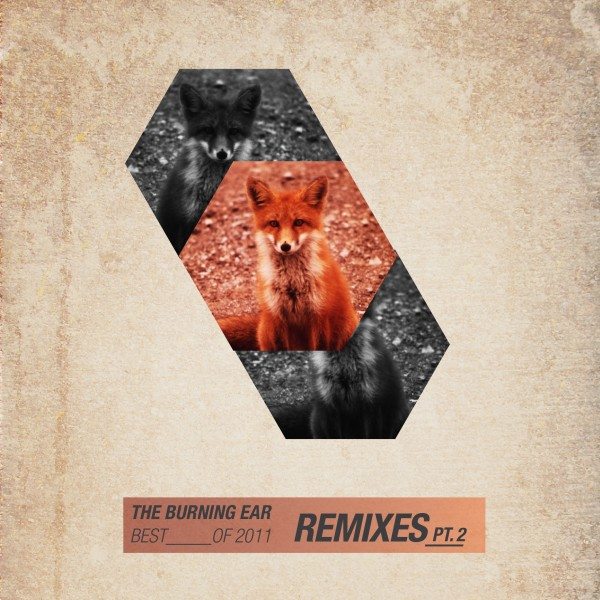 Ahem! Excuse me. If you thought you were taking a break because last weekend was New Years Eve then forget it. This is the mastercard zithromax online first weekend of 2012 and it’s time to kick things off right. Below is a list of the best remixes of the past 6 months and buy tadalafil brand they are quite restless so please let them out this weekend. Walks and feeding are optional.

Any glaring errors in judgement? Any additions you would make? Any good pizza in L.A.?

22. â™«Â Beethoven – Moonlight Sonata (Sound Remedy Remix)Â / Don’t fuck with a classic unless you are going to do it justice. That goes double for my dog Beethoven. Good thing justice was served! Plus: wobbles I can stand.

21. â™«Â Enrique Iglesias – I Like How It Feels (DWNTWN remixxx)Â / The original was on in every clothing store in the world for a while there. Making it massively enjoyable again is a huge feat.

17. â™«Â M83 – Midnight City (Alcala Remix)Â / One of the top remixed songs of the year had stiff competition but Alcala’s slow build explodes the original into the stratospheric massiveness that it always hinted at.

15. â™«Â EverythingEverything – Final Form (Cats Hero Remix)Â / One of the most spastic bands around stay exactly that way. And all is good in the world.

14. â™«Â Gotye – Somebody That I Used to Know (feat. Kimbra) (The 14th Minute Remix)Â / Piano! There were exactly 427 remixes of this song last year. Only The 14th Minute’s makes this list. (Although some others actually were pretty good)

10.Â â™«Â Theophilus London – Why Even Try (RAC Remix)Â / A thousand fantastic RAC mixes ago there was this one. The soundtrack to an indie carnival fun house. Classic.

9. â™«Â We Barbarians – Headspace (Grouplove + Captain Cuts Remix)Â / Remix tag team! This one goes off the high ropes at 0:40 for a full mat slam that keeps me pumped and robot dancing for like forever.

8. â™«Â Citizens! – True Romance (Gigamesh Remix)Â / From the moment Gigamesh drops that beat it’s all over. The windows are down and buy levitra online I’m practically climbing out the window to get the whipping wind on my face. Thank goodness for seat belts.

7. â™«Â Kelly Clarkson – Mr Know It All (It’s The DJ Kue Remix!)Â / DJ Kue absolutely crushed it this year. Radio pop has never had such a generous friend. You tell ’em Kelly! DJ Kue got your back!

5. â™«Â M83 – Midnight City (remixÃ© par Who Killed JR)Â / The piano intro. The faraway creep of the familiar song. The tweaked out grooves. The way all that goes bonkers fireworks style when it drops. A late entry to the “Midnight City” remix game but an absolute crusher in my book.

4. â™«Â KAMP! – Cairo (Moullinex Remix)Â / This one gets stuck in your head and then lays little dancing critters that bust synchronized dance routines every time you poorly sing along.

2. â™«Â Tim & Jean – I Can Show You (Jump Jump Dance Dance Remix)Â / Just try to hold back the sunshine blazing from every pore of this jam. I will dance every time I hear this remix. Guaranteed.

1. â™«Â The Notorious B.I.G – Everyday Struggle (Frogs in Socks BiG Bootleg)Â / Just as you get your head around the odd and minimal beat you realize that Biggie sounds clearly than ever and everything fits in such anÂ awkwardlyÂ perfect way you wonder how such a thing could exist. Then you understand that the world is full of all sorts of miracles that nobody can explain. 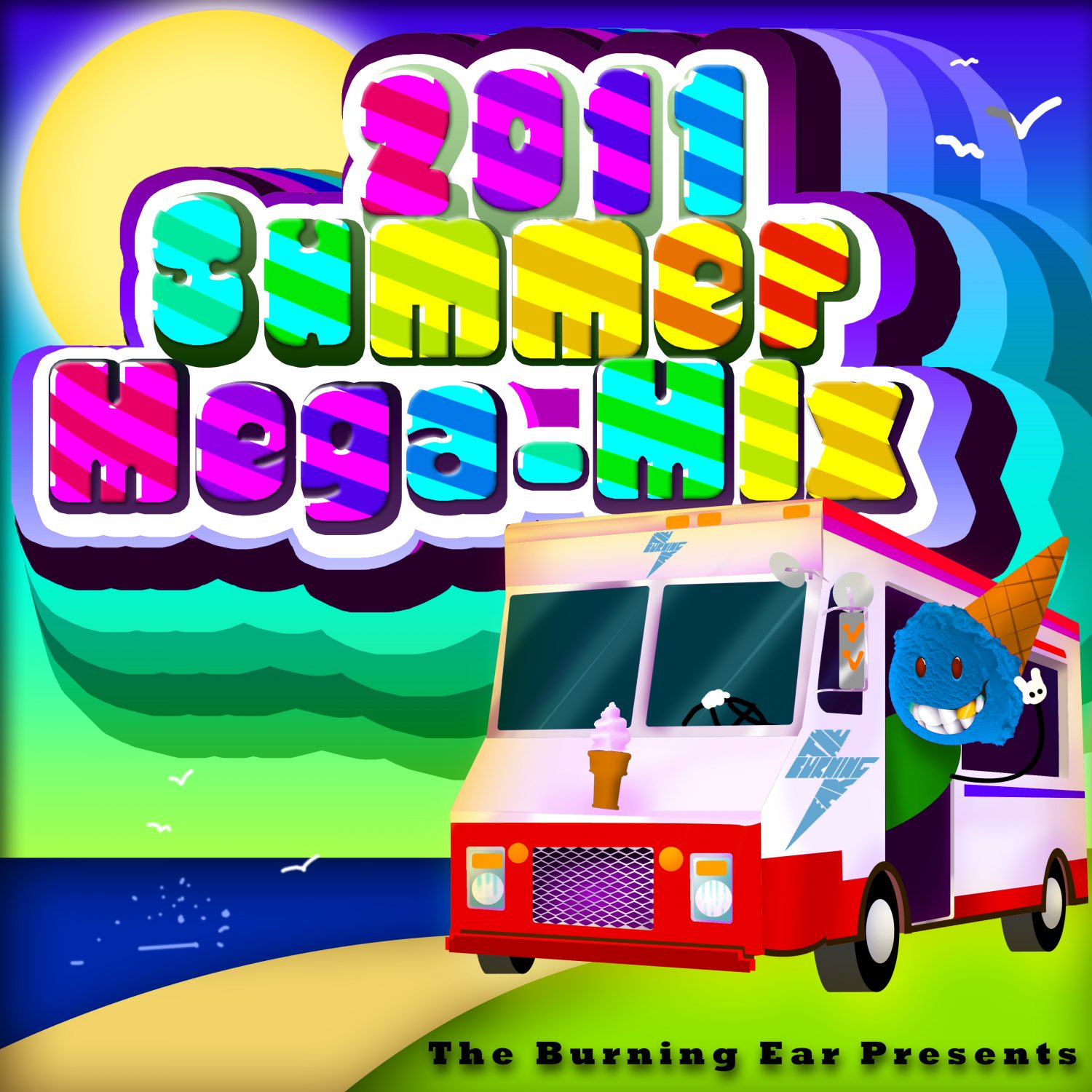 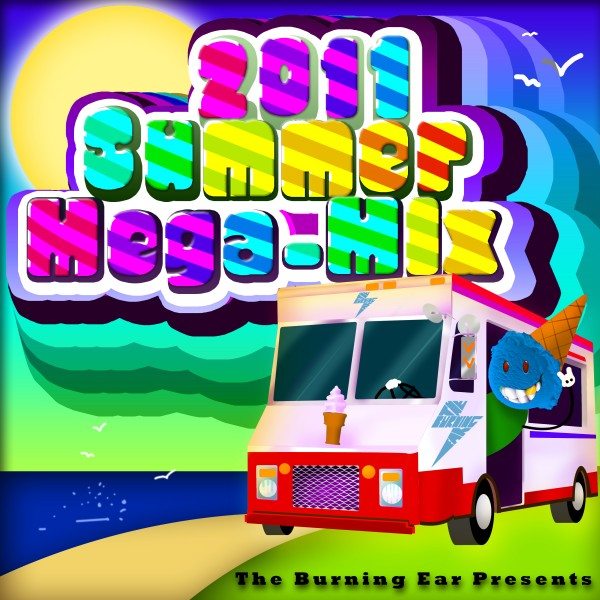 I don’t wanna hear one peep about how “summer is almost over!” or “but it’s not even sunny where I am” or “this mix is late” or “my eyes are melting from that album art.” Summer is a frame of mind and TBE is about to whip yours into shape! Now that you have grown tired of your own summer mix as well as all the ones that other blogs put out months ago, it’s time to get the summer mix to not only end all summer mixes, but to end summer itself! (Except thats not even true because I have a specially themed bonus summer mix for next week! Stay tuned…) The Burning Ear 2011 Summer Mega-Mix has something for everyone and happens in a few different waves so it’s best listened to in order.

So smooth out those short shorts, dust off those cocktail umbrellas, slide those shades up on the nose, and feel the warm breeze between your sandy toes because this mix is about to start with a bang. And did I mention that album art courtesy of DARTS? I can’t even count the number of awesome things going on. There is at least one for each of the 19 jams happening below. END_OF_DOCUMENT_TOKEN_TO_BE_REPLACED 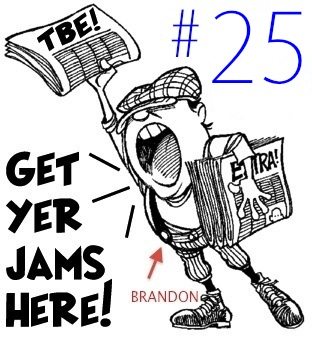 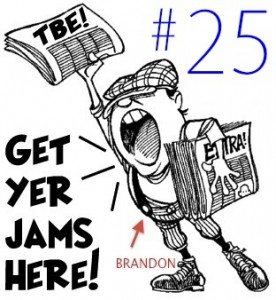 What better day to drop the 25th Digest!? Chew on these and fire off some thoughts in the comments.

Right-click link to download. For more jams by any of these artists use the â€˜tagsâ€™ links at the bottom of the post!

â™«Â Frank Ocean – DreamkillaÂ / New (or maybe old) Frank Ocean produced by the Midi Mafia who also did one of the best songs of the year so far, “Swim Good.” Butter.

â™«Â Wale – Lacefrontin’Â / Remember when this guy was supposed to be the big thing? Just not feeling it. So much going on here but kinda nothing going on.